In this post, I will talk about the Singleton pattern. Which is the last pattern in the creational patterns category as mentioned in the Gang of four book. This post probably will be the shortest in the series.

The Singleton pattern as defined in the book

Ensure a class only has one instance, and provide a global point of access to it.

The previous statement may sound very simple but let’s dig into it.

So the solution is to make the class itself responsible for ensuring that there is only one instance of itself throughout the entire application, and also provide a way to access that instance. In java to achieve that, the constructor of the class should be private. Yes I meant what I just said, the constructor of the class should be private so no other class can instantiate the class. So how we can get an instance of that class if we cannot access its constructor?

We create a static function in the class that responsible for keeping track of its unique instance, one and only instance then the static function can be called using the class name anywhere in the application. That applies not just in Java,  but anywhere you want to use the Singleton pattern.

To be more concrete let’s look at the structure of the Singleton pattern. 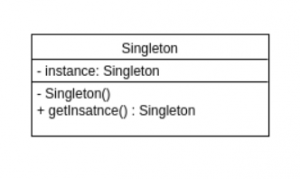 To create Singleton in java you may use something like the following:

There are many implementations of the Singleton pattern. The above one is called lazy initialization.

The equivalent in Kotlin is simply:

Yes, as simple as that, that’s how to create a Singleton class in Kotlin.
Here is a working example of using Singleton in Kotlin.

The output will be:

Singleton can be used to implement many patterns, such as Abstract Factory, Builder, and Prototype.

So as a recap the Singleton pattern is simply ensuring that a class has only one unique instance and provides an access point to that instance.

And that’s it. That is the Singleton pattern. And as always you can refer to the GoF book for more.

So that’s all I have for this post and I always appreciate feedback and If you have any question please put your questions in the comments.

Till the next pattern.